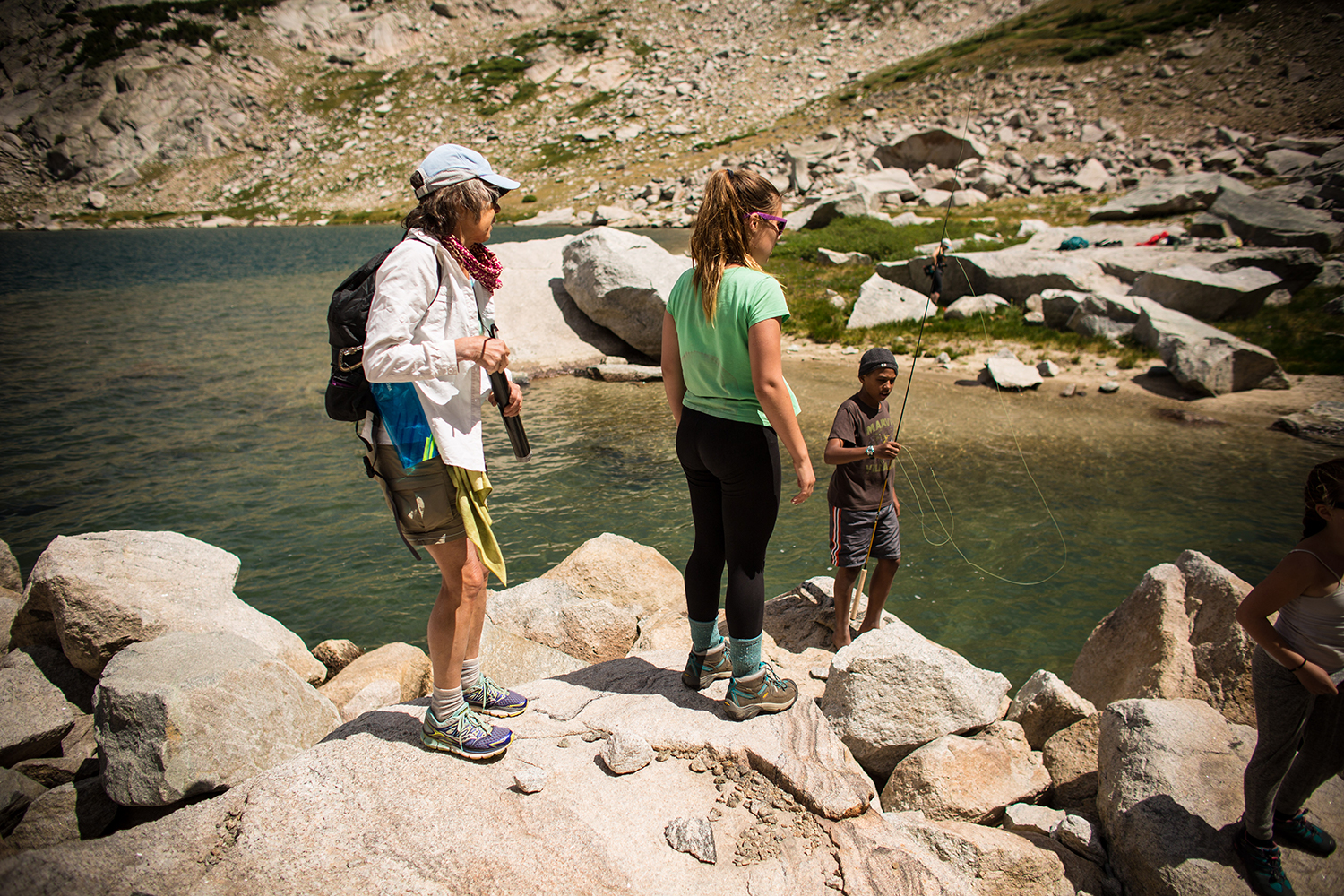 Fly Fishing in
the Winds

By: Jan
Photos by Aly Nicklas

Sometimes it takes the whole family

The last time my late husband and I packed into the Wind River Mountains, the ten-mile hike to our base camp was a little much for our sixty-something-year-old legs. Since neither of us would ever accept the excuse of age as a reason to break the mileage into two days, I came up with a clever work-around.  For next year’s backpacking adventure, I suggested we take up  fly fishing. That way, we could just stop after half a day’s hiking and spend the rest of the day fishing. We would not be resting (never!), but doing ‘productive work’—providing protein for the evening meal.

Sadly, Stuart did not make it to the next summer. But, when seventeen other members of my family agreed to join me in my summer backpacking trip in his stead, I bought a pole and a few flies, with high hopes of providing the kids and grandkids with fish for dinner.

When the big day came for me to learn to fish, I left our base camp at Deep Lake and hiked up a few miles to the more secluded Clear Lake, where ‘d heard the trout were big and hungry.  A few kids and dogs followed. Getting to the inlet of the glacially-fed lake, I saw a dozen big, fat goldens, lurking around the boulders. Quickly, I set up my tenkara rod and tried to remember all the things my friend Lisa had taught me about casting the line. Before that first cast, three dogs and a couple kids plunged into the water and those rosy beauties swam for cover. Luckily, there were still plenty of smaller, less experienced and very hungry browns just waiting to taste my flies. A couple fumbling casts and one snapped up my fly. While pulling in the line, I yelled for help. I had paid attention to all the instructions on how to catch trout, but had not really considered what comes next, if you actually succeed.

My youngest daughter, Ali, ran to the rescue, declared the fish a little small and suggested releasing it. My son-in-law Amiru showed up on her heels, looking a little hungry, and said, “We’ll eat it!” Just as Ali had unhooked the fish, he grabbed it from her and tossed it in a bag. Ali firmly stated that if we were to eat the fish, we had to minimize its suffering. She pulled it from the bag and in one smooth motion snapped its spine. Amiru set to cleaning the fish immediately. Lia placed it on a line in the icy cool lakes, where it was safe from the curious, ever hungry dogs.

On my next cast I hooked a rock and lost my fly. I then realized that my eyes were far too old to see objects as small as the fishing line or the eye of the hook. Luckily, my son-in-law Jason’s young eyes and clever knot tying skills got me back in the game. It was becoming clear that this was a true collaborative effort. With Jason tying on flies, me catching the trout, Ali killing, Amiru cleaning and Lia keeping them under a watchful eye, we soon had almost enough fish for everyone.

Lia then added a sense of drama to the production. Ali had hiked off, so when I caught the last fish Amiru had to do her part as well as his own. He cleaned the fish, then threw it across the inlet for Lia to add to the line. Lia missed the toss, and the fish landed back in the water. She bet down to pick it up, but, to everyone’s amazement, the fish quickly swam back to Amiru. While Amiru sat and stared at the magical fish, Lia leaped into action. She stripped down and jumped into the glacial lake. It was too deep and cold for her to get her head under to grab the fish, so she caught it between her toes and threw it onto the shore.

The collaboration was finalized back at camp. My son Wyatt fried our catch in olive oil and herbs. The whole family sat together on the smooth polished granite and gratefully shared the bounty of our backcountry home.

Ounces count when you’re packing miles into the mountains. This light and fast setup is everything you need and nothing more.

5 Tips for Fly Fishing with Kids
Scroll to top